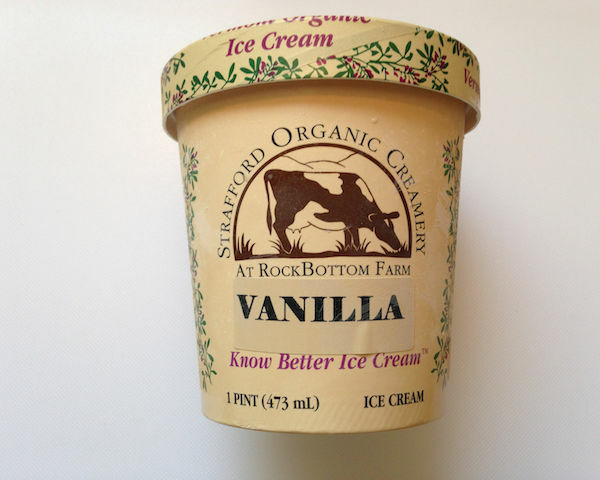 Well, we are not supposed to use superlatives... but, truly this the best Vanilla Ice Cream on the planet! Lightly sweetened cream and vanilla: a match made in heaven.

To quote Amy: "We make our ice cream in small batches, one day each week. We wouldn't dream of blending our cows' cream with anything but the highest-quality organic ingredients. We separate fresh eggs by hand, handpick the mint and black raspberries, grind the coffee just before we brew it into the milk, and basically work our tails off to make the best ice cream imaginable."
Certified Organic

This is the best ice cream I've ever tasted, and the consistency and creaminess are superb.

We think this is VERY HIGH QUALITY ice cream, and I think it must be the lack of artificial ingredients. Yes, it melts easily, but how wonderful that is! We appreciate that it has less "vanilla" taste to it than some because it complements, rather than overpowers, the cake or fruit base which we top with this ice cream. We stock it now in the freezer because we didn't realize that the cows take maternity leave and we were left last summer without a backup plan!

Delicious rich taste, nothing artificial and not too sugary. You can actually taste fresh cream.Well worth the money.

I agree with the good review. It's probably the best vanilla ice cream I have ever tasted. I usually find vanilla a bit boring - not this one! It's excellent.
It's their strawberry flavor that we find less exciting, that one could have more strawberry in it.

I actually mistakenly was given a pint of the vanilla. I had ordered coconut and the container was labeled as such, but inside (and it was confirmed) was vanilla.

Not my favorite flavor, but a great vanilla can be really interesting. While I have no doubt that the quality of the ingredients are excellent, I'm giving it only 3 carrots (which is only average) due to the consistency and the very mild flavor. I have tasted a richer or deeper vanilla flavor. This one is fairly delicate.

The major downside to this is that it lacks a richness and density in consistency. I have been around super premium ice cream before. Back when Steve Herrell introduced a new level of ice cream with his Herrell's shop near Davis Square in Somerville, MA, it really did create a new standard of commercial ice cream. It was a one-off shop, and he introduced the concept of Mix-Ins. In fact, he coined the term.

But the quality of his ice cream was not only due to the high quality natural and fresh ingredients he used, but he made his ice cream using only 20% air content. This made the ice cream MUCH denser and more costly per pint or quart. The standard for ice creams such as Brighams or Friendlys or Hoods was 60-70%. It also resulted in ice cream that could fill you up with just one scoop. Think of a light, airy chocolate cake vs. a fudgy, dense, rich chocolate cake. As he would charge $3 for a single scoop while others were charging 69 cents, it created a whole new paradigm. Brighams and Friendlys started calling their ice cream premium without changing the recipes. Breyer's came out with all-natural ice creams, but you could practically go through a half-gallon in one sitting and hardly know it in your stomach.

Other super premium brands started to crop up such as J.P. Licks and Toscaninis. Wonderful, dense, creamy ice creams and expensive per scoop. Ben & Jerry's came along with their fanciful flavors, but they have always used thickeners like carageenan to help provide that density.

As you can imagine, there's more ice cream per pint in ice cream that is 20% air than one that is 50-70% air. So I was looking forward to trying the coconut ice cream and disappointed when I opened up the container to see that it was vanilla. Still, I tried it. And was further disappointed that it lacked the dense, almost velvety mouth feel of a Toscaninis or Herrell's. Lacking the depth of flavor and the mouth feel, I don't think it's worth the almost $7 for the pint. It's not bad, but I have had some great small batch ice creams that are better than this. A young chef who had a high end restaurant in Salem used to make his own vanilla bean ice cream on the premises and it was terrific.

So, again, disappointing. There are some wonderful things to order on this site. This, unfortunately, isn't one of them. YMMV, of course.

This is probably the best ice cream I've had. I love chocolate but this vanilla is amazing.