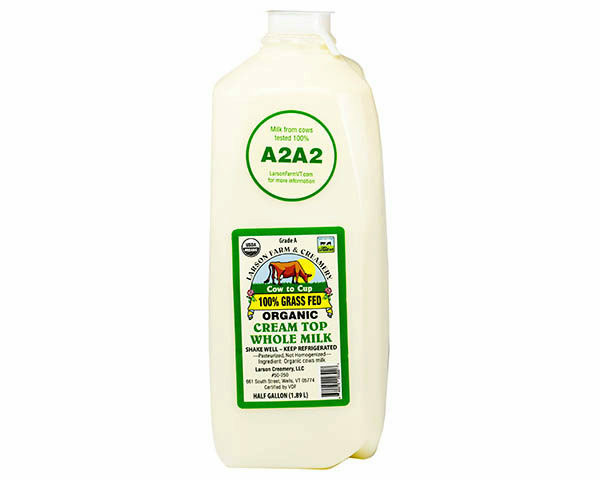 Larson Farm's A2A2 Cream-Top Milk is organic milk from grassfed Jersey cows. As the name implies, Cream Top milk is not homogenized whole milk so the cream rises to the top.
The Larson Farm has selectively bred their herd of Jerseys for the A2 protein, which can be easier to digest for people with dairy sensitivities; however, their milk, yogurt and gelato do contain lactose.

Rich and Cynthia Larson have been working to breed their herd of cows with a specific gene in order to produce milk that is high in A2A2 beta caseins. The A2 protein is present in human, sheep and goat milk and there is some evidence that indicates milk from cows with the A2 protein is more easily digestible (read more about A2A2 beta caseins at the Larson Farm Website). Rich and Cynthia's daughter, Mercy, manages the dairy herd, and sister-in-law Lee manages the creamery making Larson Farm truly a family operation!

We love this product and buy at least 4 bottles a week for our household. Only reason for this review is to rectify a few misunderstandings that I see in some of the other reviews.
First- this is not raw milk. It is pasteurized, though not ultra-pasteurized.
Second- A2A2 milk is not lactose free milk. The A2 specification has to do with the type of protein (casein) in the milk. A2 protein was the original protein in cows throughout antiquity. Some cows eventually mutated the protein in their milk and A1 protein came into being. Today's store milk is A1A2 milk and many contain only A1 protein. Mother's milk is an A2 product and easier to digest by the human body. Some farms now do genetic testing of their cows and only breed the A2 cows. Eventually they have an A2 herd that gives only A2 milk. That milk is more digestible for folks with a sensitivity or allergy to the A1 protein.
The move to do this started a number of years ago in Australia and New Zealand and the first A2A2 milk that arrived in this country was pasteurized/homogenized milk under the brand name A2/A2. This is still available in most supermarkets and a few American based companies now also sell their A2A2 milk in stores. The A2 milk company in Australia has expanded their presence in the US by encouraging American farms to follow their rules of breeding A2 cows.
Larson's product is the best A2A2 product my family has used. Also not being homogenized is better for the body as the fat globules in milk are larger in non-homogenized milk and can't easily pass through the arterial walls. There are now also a few companies that make milk and white chocolate using only A2A2 milk in their products.

We go through so much of this, I just wish they offered glass containers

The reason I will always support FTY
April 27, 2022 by Alexandria

We love this milk, we’re turning our extended family and friends onto it too. It’s so delicious, and it isn’t something we’d be able to find locally if it wasn’t for FTY. Thank you for making it possible for our family to have fresh raw milk every week. My daughter who has a difficult time with diary, has been doing so much better since we’ve switched to A2A2 milk. You’re the best!

This is by far the most flavorful milk. I have had a chance to try many different milks over my life and there were only a very few organic/biodynamic (raw) milks in France or Germany that had similar qualities. This is a sensational product and I would love for you to carry their butter and buttermilk as well.

Well, the first milk I had been buying from FTY was the Stafford Creamline milk. I loved the idea that it was in a glass bottle, which is eco-friendly. I also learned that they keep the offspring near the mothers, as well as give the mothers a break. That's all nice.

But then I was up in Maine and had some creamline milk from another company and it was SO flavorful and SWEET. I was intrigued. I had tried this Larson Farm Cream Top A2A2 milk from time to time. I was trying to see if the supposedly ability to digest it would be true for me. That might be the case. I'm not sure it's so clear cut. But I preferred not having a plastic container, which this comes in.

Anyway, after having the milk in Maine that was SO flavorful, I decided to do a side-by-side comparison between the Stafford and the Larson. I bought the Stafford one week, and Larson the next, with there being some overlap in time, so I had both. The Larson was about as flavorful and sweet as the Maine milk. It certainly had a distinctly rich and cream-like flavor. The Stafford, on the other hand, had a sort of normal milk flavor, close to what I would get at a supermarket, a thinner and blander taste.

I did another shootout again this week. The result was the same. The Larson has so much flavor, like drinking cream. It adds a richness to coffee that allows me to reduce the amount of sugar I add (I don't drink my coffee black nor unsweetened - sorry).

I had no idea that milk, itself, could taste so distinctly different. I'm not sure what they're eating or what gives the milk the flavor, but the Larson is a winner here. I just wish it came in glass bottles to be reused. I'm not confident that plastics get recycled as thoroughly as glass bottles get reused.

It is true that A2A2 milk is better for people with slight lactose intolerance. My husband is one of those people and he can drink this milk with no issues!! We had never heard of A2A2 before, so thank you to Farmers to You for bringing this milk to us.

Been a happy consumer for a few months now! The milk and especially the cream on top is delicious and there is always a fight for who opens the container first and gets the cream in our house! I'm so glad to have found this wonderful A2A2 milk similar to what is found in India and that Ayurveda has long spoken highly of and praised for its medicinal and nutritional value!

I am so happy to have found this A2A2 Milk! A family member is lactose intolerant to all milk products, and this is the first milk that has not caused any problems! This milk is fresh and delicious!! It really has opened up a new way of eating...I now can make things with milk products in the recipe!
Also try the A2A2 Yogurt...it is just as delicious!!

This milk is the absolute best I've ever tasted! In fact, I got to know about Farmers2You because of it- I was looking for a source of A2 organic milk and Larson Farms delivers and how! My 1 year old loves it as well and he is picky about his drinks:)

One request: would love to see their other products- butter, yogurt offered as well. Please?

This is absolutely amazing milk. The taste is rich and complex and out of this world. Another wonderful, single source, grass fed dairy farm to support. Yum!

This is absolutely amazing milk. The taste is rich and complex and out of this world. Another wonderful, single source, grass fed dairy farm to support. Yum!