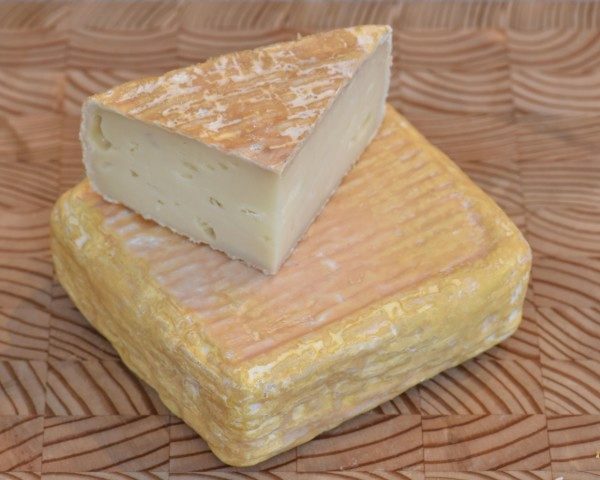 Pasteurized Goat's Milk
A creamy and richly flavored cheese with hints of caramel and savory notes encased in an annatto washed rind.

Barn First's American Alpine breed of dairy goats produce milk that has about the same fat content and protein density as cow's milk, but there are some differences. Because the fat molecules in goat's milk are smaller than they are in cow's milk, the milk isn't as likely to separate and the smaller fat molecules make the milk easier for humans to digest. In fact, a lot of people who have trouble digesting cow's milk are able to drink goat's milk. The flavor of Barn First's Goat Milk changes from season to season because of the way it is pasteurized. In the spring it's rich and sweet, in the summer the milk is floral and light, and as fall sets in the milk gets richer and you may see a little skim of cream on top. In the early winter, as snow starts to fall the goats are fed rich, second-cut hay, balsam and spruce so the milk is sweet, nutty and fatty. Then, in January and February the goats are pregnant and they take a break from milking until early spring.

First rate! This cheese has a real taste and a medium soft consistency. We left our out for a day before eating it at which point we could spread it or not, as we chose. In other words, it hadn't run. Blindfolded, I would not recognize it as goat cheese.

It wasn't my favorite...I love harder goat cheeses but could just be my taste. Would be interested to try their other goat cheese offered. Looks well made.

This cheese was a devoured addition to our holiday platter. Lovely combination of a mild soft cheese with a nice tang that makes it interesting. Since it went so quickly, we ordered it again this week!

Nice tang. It disappeared quickly from our fridge. Glad to have interesting and flavorful goat/sheep cheeses on offer for those of us that can't do cow.