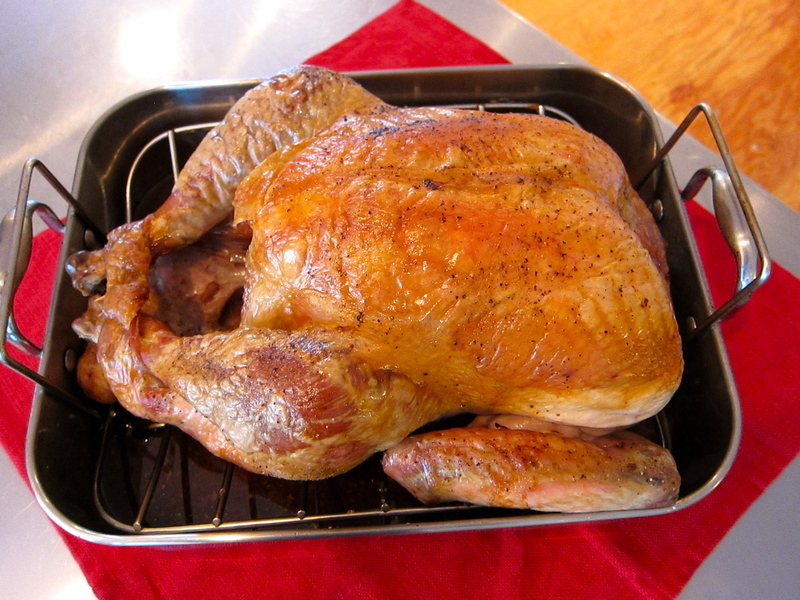 Molly Stevens is my hero in the kitchen. Her award winning book All About Braising changed the way my family eats in the winter. She’s a gifted cook and passionate instructor and has never steered me wrong. Last year the follow up to her braising tome was All About Roasting. I bought myself a copy last Christmas and gifted one to my parents. The book is equally as inspiring as her first and I heartily recommend both for your kitchen library.

Molly begins by making her turkey broth first.  For blog purposes I took a short cut and simply used boxed chicken broth.  But for the real deal my plan is to follow her recipe to the letter.  My final results were delicious even though I slightly overcooked the bird.  I was working with a 16 pound Misty Knoll Turkey.  Total cooking time was  3 1/2 hours.  Next time I’ll keep a closer eye on the internal temperature – mine went up to 180 rather than the ideal 170.  This could mean that my oven runs hot, so I recommend taking the temperature more than once and keeping a close eye nearing the end of cooking time.

Now I’ll hand it over to Molly:

THE PERFECT BIRD: HOW TO ROAST THE BEST THANKSGIVING TURKEY
Ingredients
Instructions
3.2.1652