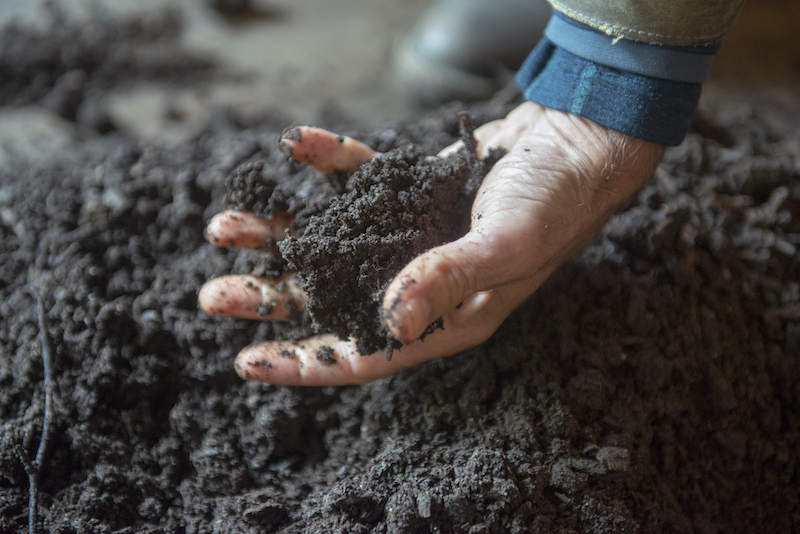 I heard a report today on the radio about the amount of soil we have lost in the Midwest. The estimate: one third! What remains, primarily on hilltops, is subsoil—or soil that is so lacking in organic matter that it cannot grow quality food or crops. It is, for the purposes of agriculture, dead.

Soil is directly associated with our health and the planet’s health. It moderates surface temperature, absorbs precipitation, and provides structure and a home for the trillions of microbiota that feed and nourish us. Healthy topsoil is also a massive carbon sink—meaning it can sequester atmospheric carbon dioxide—and therefore carries great potential for climate change mitigation. But, as the organic matter content and overall soil health declines, a tipping point is reached after which solar radiation cooks and “burns” the little remaining microbiota and organic matter. When the next rain comes the soil erodes and is washed off the farm, usually into surrounding waterways. And it is gone.

Many point to regenerative agriculture as a solution to our soils crisis. Regenerative farming is certainly not new—it has its roots in many Indigenous cultures around the world. Tending to soil so that it can, in turn, feed us is a practice as old as the Earth. Farmer, author, and co-founder of Soul Fire Farm Leah Penniman has advocated widely for a return to such practices. In her article titled “By Reconnecting With The Soil We Heal Ourselves and The Planet,” she references the Ovambo Farmers of northern Namibia and southern Angola, who employ a system of adding char to the soil over many generations as a way to increase fertility. Elders measure the age and health of their communities by the depth of this black soil. She emphasizes the intergenerational nature of stewarding soil health and fertility.

She also reminds us that when we stop valuing the soil and its health, we begin to exploit the people who work on it, and we also exploit and mine the Earth itself.

By knowing and choosing our farmers based on how they treat their soil, land, animals and workers, we can throw our support behind those who are helping to heal the Earth. And, of course, their food will heal us too.