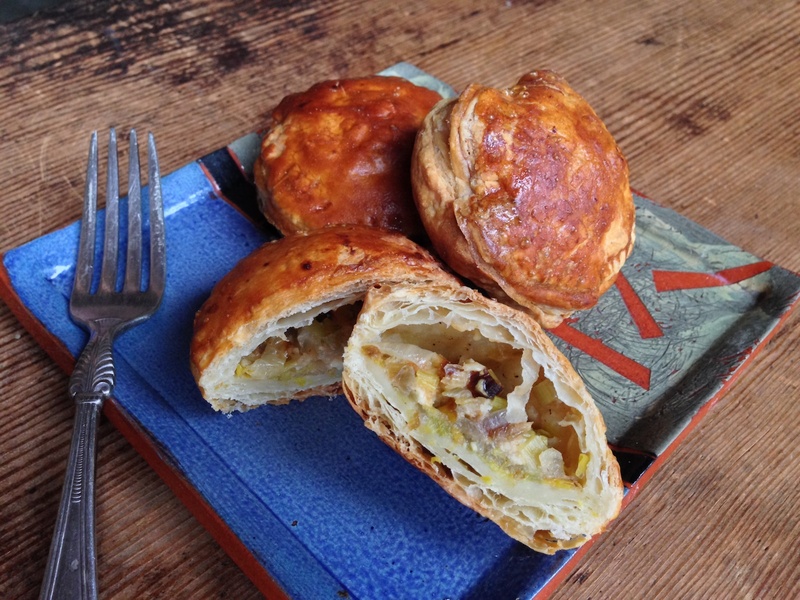 Leeks are a member of the allium genus along with onions, garlic, shallots, scallions, ramps and chives. Milder and more delicate than their cousin the onion, leeks are a much-overlooked vegetable in the United States. Go to Europe, and it is a different story altogether, as leeks are prized for the delicious and versatile vegetable that they are.

Confused about what part of the leek to use? The white and pale green sections are the most tender, but you can also use the tougher, dark green leaves to flavor vegetable or meat stock.

Often leeks need a thorough washing as fine sand or dirt can lodge between the lower ends of the sheaths. This is because soil is heaped up around them when they are growing, giving their stems their trademark snowy white appearance. Simply remove the root end and the darker top. Cut the remaining section lengthwise and rinse thoroughly under running water or swish them around in a deep bowl of water.

Try leeks poached or sauteed as an accompaniment to fish or chicken, baked in a casserole, pureed in soup, or fried as a garnish. They can be substituted for onions in most recipes with wonderful results. Like all its relatives, the leek’s onion-like flavor is changed with heat, often becoming quite sweet when caramelized. And like all vegetables, be careful not to over cook them.

Here are a few ideas for you to try:

Leek Appetizers: Pan fry 3 chopped leeks, 1 onion and a clove of garlic in a some butter and oil until soft and browned. Add a tablespoon or so of flour, 2 tablespoons of ricotta cheese and a cup of grated Parmesan. Cut 2 inch rounds out of pie dough or puff pastry (either home made or purchased). Fill each set of circles with a couple teaspoons of the leek mixture. Seal and brush the tops with beaten egg and bake at 400 degrees for about 15 minutes. An easy and delicious hors d’oeuvre!

Omelet with Leeks: Sautee leeks in a bit of butter/oil and toss in your morning omelet along with a sprinkle of your favorite grated cheese and maybe some mushrooms or tomatoes.

Poached Leeks: Leeks are delicious on their own, simply poached slowly in broth with/without a splash of white wine.  Serve as a bed for chicken or fish.

Leek Tart: Top a savory crust with a thin layer of ricotta and a layer of sautéed leeks and a bit of grated cheese.  (See earlier meal basket for crust.)

Stuffing or Savory Bread Pudding with Leeks: Toss together chunks of your favorite bread with chopped leeks, a few eggs, some cream and chicken stock, a handful of grated cheese, some parsley and/or tarragon and bake in the oven.  Great with roast chicken or turkey.

Leeks as a Garnish: Stir-fry leeks in oil until browned and crispy.  Add salt and use as a topping for baked potatoes, soups or casseroles.

Steamed Leeks: Steam sliced leeks over water for 10 minutes, drain and then toss with capers, oil and vinegar.

Salad with Leeks: Great sliced thin in a salad with your favorite assortment of greens.  Add crumbled bacon for a salty compliment to the leeks.

Pasta with Leeks: Toss some fresh pasta with a quick cream sauce (Mix together a couple tablespoons of melted butter with 2 tablespoons or so of flour over low heat. Slowly whisk in a cup of liquid — light cream mixed with the water used to poach your leeks.)  Add poached leeks and wilted spinach. Fabulous.

Leek Flatbread: Try adding sautéd leeks with crispy bacon and fennel or apples to a ready-made pizza crust and top with cheese.

Braised Leeks: Cut leeks lengthwise and cook in a skillet over medium heat with a couple tablespoons of butter.  When slightly browned, add a half cup or so of broth and cook, partially covered until tender.  Serve topped with toasted walnuts and goat cheese.

Risotto with Leeks: Chopped leeks cooked in butter are delicious when melded into a risotto with mushrooms and cheese.

Grilled or Roasted Leeks: Cut leeks lengthwise and brush with olive oil and salt.  Cook until lightly browned then top with squeezed citrus (orange and lime is a good combination) a bit of soy sauce and ginger, and serve with garden tomatoes, either fresh or roasted.